Would you like to make a bigger impact when you give a speech? These tips will bring added interest and excitement to any presentation.

Every time we talk, we use different tones of voice, gestures and body language. When it comes to public speaking, it’s no different. After determining what message you want to convey and crafting a speech, be it inspirational, educational or humorous, the hard work has just begun, because it’s time to determine how to present your material.

To give perspective, imagine that tonight you’re attending a charity event where the keynote speaker is going to advocate for those who suffer from Alzheimer’s.

The speaker comes on stage, stops in the center and stands still. He doesn’t make eye contact with the audience. When he speaks, it’s difficult to hear him. If he moves his arms at all, it’s to clasp his hands in the front and wring them together.  In a monotone, he talks about his elderly father, who had once been the CEO of a successful company, who liked to compete in tennis tournaments and had a fondness of dancing. Now, his father can’t remember anything or anyone in his family. These facts are conveyed like the speaker is reading from a list. The speaker urges you to give money to help fund research to eradicate Alzheimer’s, then walks off the stage, still not looking at the crowd.

How would you feel? Would you be moved to give money? You probably would because you care about the cause.  However, did the speaker’s words as conveyed move you to action? Did they move you to contribute even more than you’d intended? Probably not.

Now, imagine a speaker coming on stage and looking out at the audience. He begins by saying “My father achieved many things in his life. He started from a poor background, put himself through school working several jobs and became the CEO of a Fortune 500 company.” Now, the speaker moves, reaches out with his hands above shoulder height and, in a vibrant voice, says “He was larger than life to me.” Then he drops them back to his sides. “He used to be a top tennis player.” The speaker makes a motion like hitting a ball. “And he loved to dance.” He mimes dancing with a partner. He goes on to say “Now, Dad’s in a wheelchair.” His tone has changed, softened. His hands grip an imaginary chair and he pushes it a few feet along. Then he stops and looks back at the audience. “When I visit him, he doesn’t know who I am. He doesn’t know my mother, his wife of 45 years, or remember any of the successes he’s had.” The speaker pauses. “All because of Alzheimer’s.”

Are you there with the speaker? Do you imagine his father as he was, and how he is now? When you’re asked to contribute money, will you give a little more because the devastation of the disease has been brought so clearly into your mind?

Back to your speech: It’s time to begin rooting out unnecessary language. Hone your words until you communicate exactly what you want. Consider whether your words are telling the story and evoking the emotion you intended from the listener.

When performing a speech, you should always think about the following:

Varying your voice is what emphasizes your words in a speech. Rate is the pace of your words, tone is the intention behind them and pitch is the sound of your voice. 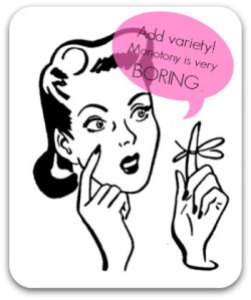 Rate is perhaps the easiest to understand. A basic mistake is talking too fast because of nerves.  It takes practice to slow down and speak like you’re having a conversation with a friend. If you have jokes, are you pausing after your punch line to give the audience time to laugh? If you’ve said something you want the listeners to take time to digest, do you pause? Your rate should vary throughout your speech, so be sure to analyze your text and practice.

Tone is more complicated, and takes even more thought.

There’s a poem by an unknown author called The Tone of Voice. It says, in part:

It’s not so much what you say

As the manner in which you say it;

It’s not so much the language you use

As the tone in which you convey it.

And the child cowered and wept.

He looked and smiled

And straight to my lap he crept.

Words may be mild and fair

Words may be soft as the summer air

But the tone may break my heart;

For words come from the mind

Grow by study and art–

But tone leaps from the inner self,

Revealing the state of the heart…

I’m sure you’ve had to sit through lectures delivered in a monotone, been scolded by a parent, enjoyed soft words from a loved one, heard an emotional plea from a friend or a call to action by a politician. Each time we speak, we need to consider what tone of voice to use and, throughout our speech, what response we want to evoke in our audience. Our voice is our primary tool to bring about the result we hope from our listeners, but can be made more dynamic by our use of the stage or lecture space, our energy and body language.

Look at the words of your speech. What tone do you want to use for each phrase? Some speakers think they need to increase volume on their key points, but sometimes softening and speaking in a quiet tone actually brings about a better effect.

The best thing to do is tape yourself reading your speech exactly as you’d perform it, then listen. You’ll be able to hear where you need to improve. Better yet, enlist someone you trust to give you honest feedback.

Pitch is how you sound when speaking. Sometimes, when people get nervous or excited, their voices go up and up in pitch. The deeper tones of a speaker’s voice resonate better with a listener’s ear. If you’re gifted with a resonant speaking voice, that’s a starting advantage. Still, no matter whether you’re blessed or need assistance, you can always improve the richness and quality of your voice by doing voice exercises or hiring a voice coach. You will learn body posture and breathing, do tongue twisters to loosen up, exercises to improve the timbre of your voice and more. All of this will add to the quality of your performance.

When speaking in a large facility without a microphone, you have to project your voice so everyone can hear you. Picture bouncing your voice off the back wall and you will get some idea of how much energy you’ll have to put into it.

Energy is what you bring to your performance. Think about when you’re tired, sick or simply “not feeling it.” If you don’t have energy to put into your performance, you’ll come off as uninspiring or merely adequate. Sure, you might be better than other speakers on a technical level, but you have to amplify your energetic output for your message to be fully conveyed and appreciated. Sometimes we think we’re putting across an emotion, but it’s not enough. It’s easy to bring to mind an actor’s performance that felt flat. That person didn’t put enough of themselves into their role. The same thing goes with public speaking.

When you first start out in public speaking, gripping the edges of the podium and glancing nervously at your notes might be the best you can do. That’s okay. As you progress, moving away from the podium, even if you have to keep a hand on it like a life preserver, is a good move forward.

We use gestures when we speak and don’t really think about them. They come naturally. When it comes to public speaking, it sometimes seems that we suddenly don’t know what to do with our hands and arms. Our facial expressions become wooden and we can’t make eye contact. The first thing to do if this happens is to take a deep breath. Breathing helps to relax your body and bring oxygen to your brain. Breathe deep into your belly, below your navel, for best results.

At the start of your speech, you should stand still and have limited movement. The audience needs time to get used to you.

In speaking, whenever you’re using gestures, they should be both natural and planned. Imagine when you’re telling someone how tall a child is. You might bring your hand to the height level to further demonstrate what you’re saying. Gestures in a speech are no different. If there are phrases that can be emphasized through use of body language, think about them and plan them into your talk. Gestures are made above your elbow height and can also include your head, nodding or shaking it to emphasize your words.

A quick way to see if you have gesture is to videotape yourself doing your speech.  Sometimes we unknowingly make the same gesture repeatedly, which can distract from the message. Also, the larger the stage, the larger your gestures should be. What might be appropriate in a one-on-one conversation won’t convey the same message to a larger audience.

Darren LaCroix, the 2001 Toastmasters World Champion of Public Speaking, famously fell to the floor of the stage during his world championship winning speech and stayed down for uncomfortable moments. This was done purposefully to emphasize failure, by literally falling on his face. He then talked about how to get back up and overcome obstacles. This dramatic move was an “act-out” of his words and something that caught the audience and judges’ attention.

Darren Henderson, 2010 Toastmasters World Champion of Public Speaking, wore a World War II bomber jacket, helmet and goggles to add to his words about pretending to be a pilot. He then acted out play-fighting arial battles with a childhood friend, pretending to talk into a hand-held radio microphone to emphasize his words, which were “Snoopy One to Snoopy Two.”

Act-outs can be as simple as smelling an imaginary flower, pretending to open a door or anything that adds to the picture you’re painting with your words. You don’t have to be that dramatic to emphasize your words, but look at the text of your speech and determine if there are movements you can do that will add to the visuals of your message

If you’ve attended a live play, you might notice an actor who doesn’t grab your attention. That’s because they might be having an off day and not putting as much of themselves into their performance as necessary.

The energy level of a speaker can affect the way his or her message is received. For instance, if you have a cold and have to give a presentation to an audience of 200 people, you’re right to be concerned. A speaker has to give out their own energy and enthusiasm to engage an audience and, if you don’t feel good, you’re going to come across as flat.

Unless you’re Steve Jobs, with an audience already on the edge of its seat waiting the announcement of a new Apple product, speaking to live audiences requires your energy  be “larger than life.” This doesn’t mean you have to be someone else. In fact, the best public speakers sound like they’re having a conversation with an old friend, but you need to be aware of the venue and audience size so you can gauge how much energy you have to put into your performance.

After you’ve written your speech, look for opportunities in the text for vocal variety and use of body language. Adding these ingredients will make your message more dynamic and stay in the minds of your listeners.